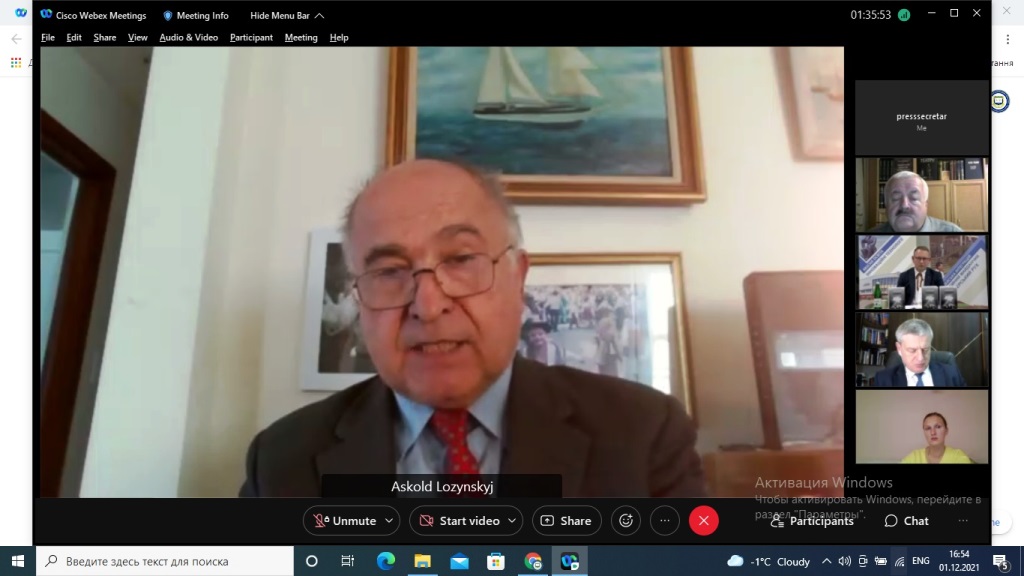 In the context of the project Meetings with Well-known Personalities there took place presentation of the collection of Askold Lozynskyj Essays «Ukraine in contemporary world» (Ivano-Frankivsk, Vasyl Stefanyk Precarpathian national university, 2021). Askold Lozynskyj was the president of Ukrainian World Congress (years 1998-2008). Professor of the Department of Politology of the Faculty of History, Politology and International Relations Ivan Monolatij was the moderator of the event.

«Our meeting with the author of this interesting project «Ukraine in contemporary world» long-term president of Ukrainian World Congress, president of Ukrainian congress committee of America and lots of other institutions, our partner Askold Lozynskyj is being held symbolically on the 30-th anniversary of the referendum, when Ukrainian people supported the idea of the independence of Ukraine. That was a memorable event and Askold Lozynskyj made a great contribution to this process», admitted rector of the university Ihor Tsependa.

Participants were presented with the editorial project «Ukraine in contemporary world». Texts collected in the book are written by Askold Lozynskyj within the period of September 2020 and the beginning of September 2021. These are the author’s thoughts about the place and role of Ukraine in the contemporary world, dedicated to the 30-th anniversary of its independence. They are grouped chronologically into themes, such as president elections in the USA, position of Ukraine on the international arena and actual for our country internal and external trials and tasks in the context of the 30-th anniversary of the state independence of Ukraine.

In the course of the conversation with the participants of on-line meeting Askold Lozynskyj told about his professional and personal life. He also referred to students with his crucial appeal – «learn to develop your own critical thinking, which should never be the reflection of other people’s thoughts and ideas». Everyone’s mission, according to his words, should be kindness and sincerity of their aim.

The mentioned on-line meeting also included the questions of cooperation of Vasyl Stefanyk Precarpathian national university and the Lozynskyj’s Foundation. This partnership results in getting grants by the best students of the university.

«We plan to widen the activity of our Foundation. We aim at enlarging the grant fund. So, we are waiting for new projects from your students in the spheres of politology, economics, law sciences. I will be glad of our further cooperation», admitted Askold Lozynskyj.