Violetta Lappo, Oksana Poiasyk, Olha Rusakova, and Mariia Chepil.
Educating Future Teachers to Integrate Hutsul Ethnic Culture into the Primary School
Learning Policy: Monograph / literary editing by Halyna Voloshchuk. Ivano-
Frankivsk: NAIR, 2021. 316 p.
ISBN 978-617-8011-02-4
The need to foreground the pedagogical potential of domestic ethnic culture
has been argued in this joint monograph. The criteria and readiness markers of
students and teachers-practitioners for ethnic socialization of primary school students
have been defined. The driving forces behind the professional development of
teachers-to-be in the field of ethnization of the educational process of primary school
have been revealed. The pedagogical conditions, forms, methods, and means that
ensure the integration of the Hutsul ethnic culture elements into the substantive
content of the New Ukrainian School have been described.

Ivan Monolatii, Volodymyr Velykochyy, and Yurii Plekan. Kosachiv
Detention Camp within the Context of Ukrainian-Polish Relations in Galicia (1918-
1919): Joint monograph. Ivano-Frankivsk: Kushnir Publishing, 2019.
The basis for writing the work was the archival and museum documents
providing information about Polish prisoners of war during the period of the Western
Ukrainian People’s Republic (ZUNR). The focal point the authors tackled was
whether the Ukrainians of Kolomyia were truly responsible for the deaths of the
Poles of Galicia. Historical records indicate, the Ukrainian medics saved internees,
often risking their health and lives, treating prisoners for typhoid, worms, and the like in the camp. In general, the scholars have managed to identify more than 100 captive
Poles, as well as those who are buried in the military cemetery in Kolomyia,
functioning in 1914–1918 timeframe.

Oleksandr Soletskyi. Discourse Emblematic Forms: From Myth to
Postmodernism. Ivano-Frankivsk: Lileia-NV, 2018. 400 p.
ISBN 978-966-6681-452-6
Relying on the studies of domestic and foreign scholars, the most commonly
used terminological allologs, which identify the conceptual range of the categories
emblem and emblematicity, have been defined. The study uses a diachronic approach
to monitor the modification of emblematic forms and to outline the historical
perspective of this genre development. The interrelationship between an emblem and
hieroglyph, metaphor, metonymy, allegory, word picture, etc., in general, those
phenomena that offer various types of literary delimited ‘transitions’, belonging to
the indirect expressions of cognitive prototypicality and significativity has been
traced. 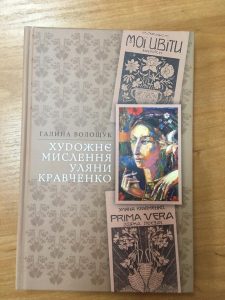 Halyna Voloshchuk. Artistic Thinking of Uliana Kravchenko. Kyiv: VTs
“Prosvita”, 2018. 196 p.
ISBN 978-617-7201-69-3
The book centers on the study of the entire corpus of artistic work by Uliana
Kravchenko (1860–1947). The main emphasis is placed on the analysis of the lyrical
type of the writer’s talent. Ms Kravchenko’s eminetly lyrical way of artistic thinking
is represented by her several collection of works. Their image-motif system reveals
the dominance of the so-called leader neo-romantic discourse next to which functions
the symbolist and realistic poetics of landscape, personal and social contrasts, as well
as the motif of serving the people in terms of nurturing public spirit of children
through the word.

Proceedings of All-Ukrainian Scientific and Practical Conference “Kolomyia
and Pokuttia during ZUNR State Formation” (Kolomyia, 05 October 2018)
Mykola Vasylchuk. Artistic Discourse of Hutsulshchyna in the Ukrainian
Literature of the Nineteenth and Early Twentieth Centuries: Monograph. Ivano-
Frankivsk, 2018. 464 p.
ISBN 978-617-7436-13-2
The monograph examines the distinctive features of the artistic representation
of Hutsulshchyna in the Ukrainian classical literature. The stages of artistic adoption of Hutsulshchyna by the Ukrainian literature in the time of realism and modernism
have been disclosed. The scholar’s interpretation of Hutsul texts in folkloric and
mythological key is also presented coupled with new scientific notions and
definitions suggested. 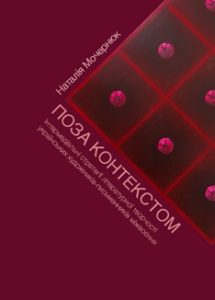 Nataliia Mocherniuk. Bereft of the Context: The Interwar Period Ukrainian
Writers-Artists’ Intermedial Strategies: Monograph. Lviv: Publishing House of Lviv
Polytechnic National University, 2018. 392 p.
ISBN 978-966-941-255-3
The book is focused on the literary work of the Ukrainian artists who started
out as writers in the 20-30s of the twentieth century (Sviatoslav Hordynsky, Ivan
Krushelnytsky, Volodymyr Havryliuk, Vasyl Khmeliuk, Halia Mazurenko, Oksana
Lyaturynska, Vasyl Masiutyn, Adalbert Erdeli, and Oleksa Hryshchenko). Artistic
implementations of interaction with the fine arts and through this enrichment of
literature are due to the creative practice of the authors in another art form, and the
artistic thinking of these multi-gifted persons. The work has regard to intermedial
concepts, based on which the author has developed her approach to the analysis of
artists’ literature; the intermedial focus of the interwar period has been described as
also more intensity has been put onto essential conceptual issues of the intermedial
dialogue.

Logos: edited volume of student’s scholarly works. Volume I / compiled by
Oksana Poiasyk and Olha Petriv. Ivano-Frankivsk, 2017. 192 p.
The current volume is comprised of the articles by the students of Kolomyia
Institute, Vinnytsia Mykhailo Kotsiubynskyi State Pedagogical University, Hryhorii
Skovoroda University in Pereiaslav, National Pedagogical Dragomanov University,
and Kyiv National University of Trade and Economics.
The collection addresses the matters of improving the pre-primary education,
elementary school, recent developments in psychology, the study of certain aspects of
linguistic research as well as the issues of physical development of schoolchildren
and students.

Vasyl Nahirnyi, and Olha Rusakova. Concise Dictionary of Uncommon Words
in Kolomyia and Adjacent Villages. Kolomyia: Vik, 2016. 64 p.
The dictionary includes approximately 2,000 lexemes, which were used in the
period from the 19th century to the end of the first half of the 20th century and
remain partially in circulation in the expanses of the Kolomyia region. This is a
popular science book intended for a large audience as well as for all those interested
in the diversity of vernacular.

ISBN 978-966-2716-70-2
The book focuses on the study of socio-political, socio-economic and
ideological aspects in the development of the West Ukrainian lands, on the
psychoeducational peculiarities of ethnocultural traditions of Western Ukraine, as
well as on literary and linguistic studies of Pokuttia and Hutsul region.